At this age, handwriting and story writing are two different skills.  It’s hard when we ask a student to combine the two.   It usually results in stories that aren’t much better than those first readers we subject them to (Dan ran fast.  Sue ran fast.  Dan and Sue ran fast.  The End)

This year I have allowed Elijah to dictate his stories to me.  He started with a few paragraphs and has moved to 400-500 word stories!   Stories with setting, characters, and conflict.  Stories that reflect the FIAR lessons we’ve completed and stories that are REAL stories.

So, what was I thinking when I pulled out something new today? It’s a book called Tops and Bottoms Writing Forms by Evan Moor.    When I told Elijah to write a story about a bear (the form he chose) on his six lined HWOT paper, he looked at me like I had purple ears and a pink nose.   He said, "Mom, I can not fit a story on that paper."     And I thought…well, I could make him write one of those stories…"Once there was a bear.   It met a friend.  They ate lunch.   THE END"

Or, I could think fast and use this product in a different way.

Since he’s been reading day and night about bears lately, I took him over to the computer and asked him to dictate a bear report to me.   He dictated it (though I did have to limit him to four facts).  I printed it and then had him copy it on to his HWOT lined paper.

He worked so hard on copying it in his best handwriting!   First he "wrote" the report (by telling me what to write) and then he really WROTE the report!

Here is his finished product (which may look sloppy to you, but I know how hard he worked on this, and I am so HAPPY!): 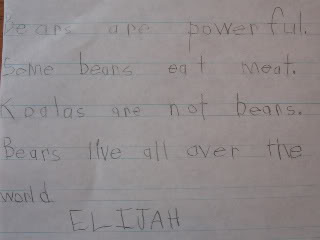